Flood season is on its way – so as a critical event management company – it’s time for us to talk about this hazard. Flooding is the most common natural disaster in most US states – and the most expensive. According to the American Red Cross, around 90 percent of damage caused by natural disasters is from flooding. Floods cause an average of 100 US deaths each year. Since 2000, overall flood damages have quadrupled in the U.S.

So what are the risks, trends and what can be done to be prepared better for floods?

Flooding usually occurs after intense and repeated rainfalls. Flood season varies for inland and coastal territories. Inland areas are most often at risk during spring and summer because of heavy seasonal rains. Coastal and nearby inland areas are more likely to flood due to summer and fall tropical storms.

And oceans are rising faster now. NOAA reports that rising seas are bringing water into coastal communities at record rates. That means more damage to homes, inundated roads, and unsafe drinking water, among other things.

By 2030, the frequency of high-tide flooding could double or triple, according to NOAA. They project that, by 2050, that number could be up to 15 times as great, with the typical coastal community flooding between 25 and 75 days a year.

And flooding is not something we’re in control of. While forecasts may be more precise, severe weather can cause drastic damage whether expected or not. But we can get prepared.

Here’s what we think emergency response teams can do to minimize the human losses and economic damage during flood season:

According to the NY Times, flood risk is far greater than official government estimates. Across the United States, new calculations by the First Street Foundation suggest that millions of people are exposed to a hidden threat of flooding — and one that will only grow as climate change worsens. The map below will help you to estimate the risk for your county. Or you can look up a specific address at the foundation’s new website. 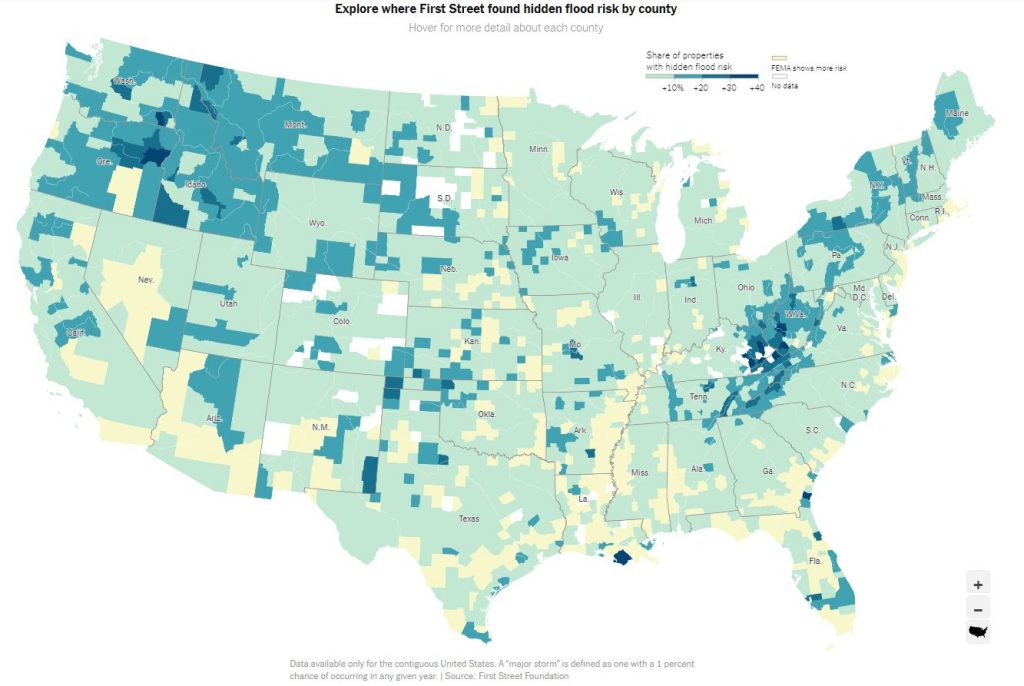 If you prefer a historical view, you can see empirical flood risk and flood-related costs for your state and county at: https://www.fema.gov/data-visualization/historical-flood-risk-and-costs

Grab people’s attention about the problem and give them information they will find useful. (The floodfactor.com site is great for this because folks can look up their specific address.)  Share potential flood-related costs with your community.

Get people’s attention by appealing to their pocketbooks. According to a new Stanford University-led study almost 4 million single-family homes in floodplains are overvalued by an average of $11,526 per house – nearly $44 billion in total. And that’s without accounting for the greater risk predicted by the First Street Foundation FloodFactor site.

Spread the word via social media, your county or city website, local newspapers, etc. And when you do, use that as a reason for residents to sign up for emergency alerts, assuming you have a system. Here’s a press release from our marketing plan for citizen sign up that you can use as a model. (If you don’t have a system, check out Hyper-Reach.)

You’ve probably already done this – after all, you’re in emergency management. But we have to say it anyway.  When it comes to emergency preparedness, knowing exactly what you are going to do and say to the public is absolutely essential.

With a mass notification system like Hyper-Reach, you can both send alerts to the public and also communicate with your staff quickly and effectively. With a unified communication platform, you can send hundreds or thousands of voice, text, email and other messages from one screen and with a  minimum of effort. And if the system is Hyper-Reach, you can even reach people with browser push notifications and Amazon Alexa smart speakers.

Message templates save time and eliminate ambiguity by providing a “fill-in-the-blank” approach to creating alert messages.  We’ve developed some emergency weather templates based on the Five W’s (Who, What, When Where, and Why) principle.  Feel free to use them as is, or as a model to create your own.

Don’t have an emergency notification system in place? Take a look at Hyper-Reach today. It’s the easiest-to-use, most scalable, reliable and secure mass notification solution for public safety, local government, education, and business.