This story from LAist.com illustrates the danger of mistakes in the use of IPAWS and the Wireless Emergency Alert system.

In late September, the LAPD sent out a WEA alert warning about about a dock fire at the port of LA (see photo from Reddit).  But the WEA alert went out to residents as far as 40 miles away.

To make matters worse – according to the article – the alert went out at around midnight, three hours after the fire was mostly contained.  Which means it wasn’t relevant, wasn’t useful and was seriously irritating to many of the people who received it.

We have a number of concerns and some thoughts about how to repair the damage:

Does it have to be this way?  Here are some thoughts about making things more effective:

We’re glad that local officials are using the WEA system for alerting, since it gets around the problem that emergency alert systems are confronting due to lack of wireline listings to call.  But it’s important to get this right. 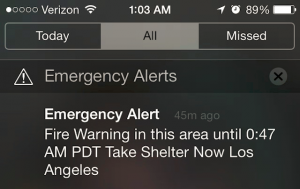